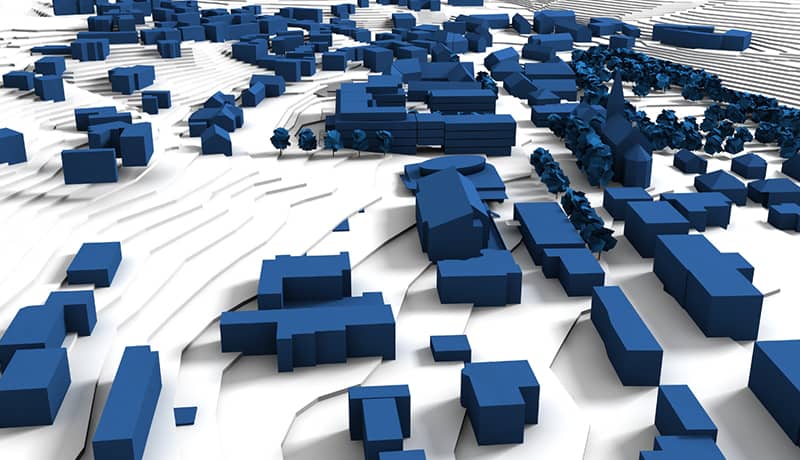 Cities are no longer conceived as they were until a few years ago. The Smart City concept has burst onto the scene with one aim in mind: to reconcile us as a society with the environment.

Urban planning is now based on technological tools and initiatives to make city management a much more efficient and optimised process.

Do you want to know the role of GIS in urban planning? Stick around and we’ll tell you in detail.

How has urban planning evolved in recent decades?

More than half of the world’s population lives in urban areas, but until a hundred years ago, as Ted Ed highlights, only 2 out of 10 people did. How has urbanism evolved?

In the early days of mankind, our ancestors were nomadic hunter-gatherers, moving frequently in search of food, until they developed an understanding of selective cultivation and various agricultural techniques. This gave rise to the first semi-permanent settlements, which still depended on the soil’s dwindling fertility.

However, with irrigation and tilling of the land, settlements became more stable and durable over time, allowing for food surpluses, leading to the development of specialised trades and the birth of the first cities.

Later, with the rise of trade, the technologies that made it possible, such as carts, ships, ports and roads, also improved, which led to the migration of people from the countryside to the cities in search of work and new opportunities.

It was with the Industrial Revolution that the great expansion of modern cities as we know them today took place, thanks to the large-scale use of technology in the creation of road networks and the distribution of electricity.

From that time onwards, urban planning evolved exponentially, thanks, for example, to the development of means of transport, which favoured the increase in the urban area occupied, giving rise to a division of the city into different spaces such as a centre with luxurious housing and commercial and administrative activities, an extension for the bourgeoisie with amenities such as paving, lighting and drainage, and outer areas in which industries and working-class neighbourhoods were located.

All of this led to what we know today as the post-industrial city, in which the evolution of urban space has given way to a centre specialised in tertiary activities and pedestrianised to encourage the use of public transport and reduce pollution and traffic congestion, and a periphery in which business, industrial and technological parks are located.

Why are GIS important in urban planning?

And so we come to what is now known as the Smart City, and the environmental commitment that underlies this philosophy, to combat the threats of deforestation, drought, waste and climate change that plague the planet.

What is the importance of GIS in strategic urban planning? The answer is simple, yet complex: data. Without a system capable of collecting, storing, analysing and correctly using the geographic information that cities generate every second, city maintenance would be very difficult:

Fisotec’s actions in this field

For this reason, at Fisotec and in parallel, we develop urban GIS software, for example, for public lighting, drinking water and the environment, as well as exhaustive GIS data inventories that allow us to offer administrations and maintenance companies an intelligent management of urban services.