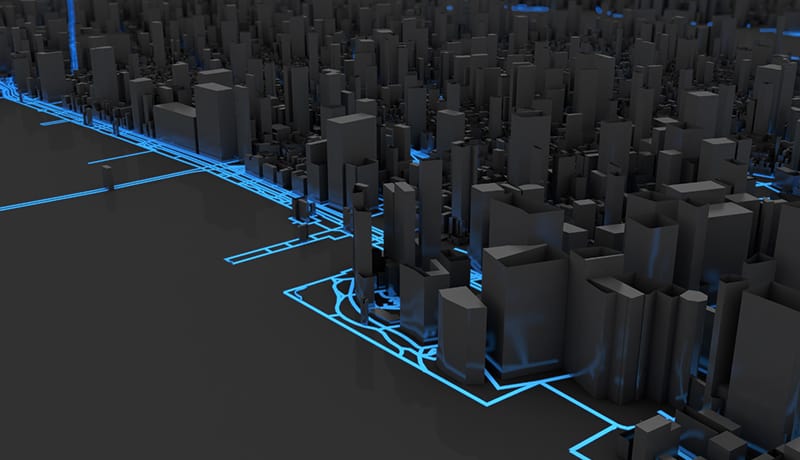 What are digital twins and what are they for?

We cannot say that the inventory of data for the management of urban services is a quick and simple process, but what is certain is that technology is advancing by leaps and bounds and mechanisms such as real time, which we have talked about on some occasions, or the arrival of digital twins, are facilitating the capture and analysis of this information.

Do you want to know what a digital twin is, what they are used for and how they are evolving in the field of smart cities? Read on!

Can you perfectly define what a digital twin is? Think of twin boys, aren’t they identical? Well, the same thing happens here, it is an exact virtual replica of a product. For example, try to visualise the façade of a building, or the sewage and drinking water network of your city, or even the entire city.

But are digital twins a digital representation and that’s all? Nothing more? On the contrary, the aim is to incorporate real-time data into them, obtained thanks to sensors or other technologies related to Big Data, and which allow, through Machine Learning or Cloud Computing, to visualise and analyse how the replicated product or system behaves.

It sounds like science fiction, you may be thinking, but nothing could be further from the truth, they are experts in mathematics applied to data science who analyse this information and develop a mathematical model capable of carrying out the same actions as the original product.

How is this programmed computer system evolving?

And how digital twin technology has evolved. Did you know that back in 2002, computer engineer Michael Grieves of the Florida Institute of Technology talked about digital twins and how they could act on their own?

But not only that, it was in 2010 when NASA saw this concept as viable, to repair and maintain its spacecraft remotely. And so, today, we can talk about various types of digital twins.

This is the case of the digital twin prototypes (DTP), which before creating the final system, a digital one is manufactured to determine what its subsequent behaviour would be; the digital twin instance (DTI), which allows testing in different contexts and scenarios with both real and virtual objects, or what is known as Digital Twin Aggregate (DTA), which compiles information from the studies carried out in the DTI to determine the capacity and evolution of the product.

True, we could say that NASA was a pioneer in this type of technology, but in the 20 years of evolution, the application of digital twins is becoming more and more common in many sectors and industries, and the logistics sector is one of them.

Did you know that the containers that hold the packages that arrive at your home or ours have IoT sensors that generate data such as their location or the levels of pollution associated with their transport? And what happens to that information? That’s right, I’m sure you’re imagining it, it’s the sensors that send those details to the digital twin, which, through machine learning, makes improvements so that the entire logistics process always takes place in the most sustainable and efficient way.

Or the European Commission’s Destination Earth (DestinE) initiative, through which the organisation is recreating nothing less than a digital twin of planet Earth. Where do they get the data from? From the large number of weather stations, satellites, etc. that send information in real time. This is how they are working on an accurate model to fight climate change and determine what will happen in the coming years at atmospheric and oceanic level.

Use of digital twin technology with Leica BLK2GO at Fisotec

What role do digital twins play in the urban inventories that Fisotec carries out throughout Spain?

A very important one, and that is that so far this year we have scanned and digitally modelled more than 185 buildings. What does that mean? That we have found in Leica BLK2GO the perfect complement to our GIS software.

Thanks to this laser scanner, we have been capturing images that we use to create 3D digital twins, all in different places such as real estate, urban and monumental buildings. In this way, we greatly speed up data collection and quickly and efficiently deliver 3D BIM models to our clients to manage the urban infrastructures that make up cities and municipalities.