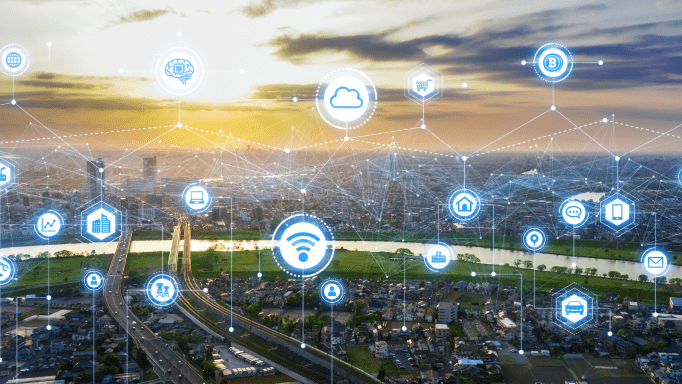 What is a smart city?

In recent years, who hasn’t heard or read about the concept of Smart Cities? Reasonable, since its purpose, doubly, is to make our daily lives much simpler and also to facilitate the proper functioning of urban environments, so why not, and why not join us to delve into the benefits that this philosophy offers in the management and maintenance of cities?

Like all history, this term has an origin, and it is at the end of the 20th century, with the integration of new technologies, in the current urban development, directing each of its actions towards sustainability and the adequate administration of public and private spaces.

Advantages of a smart city

But what has been the evolution of Smart Cities up to the present day? Undoubtedly, the development of this concept, thanks to the decisive role of Information and Communication Technologies (ICT) and the Internet of Things (IoT), has enabled the improvement and growth of society and the urban environments in which it resides, connecting its inhabitants through the efficient use of technology.

This is how cities, in a constant and infinite process of transformation, and hand in hand, not only with the Public Administration, but also with numerous engineering, consultancy and urban services maintenance companies, have contributed their grain of sand to face each of the urban challenges that arise on a daily basis.

Smartest cities in the world

And among the smartest urban environments on the planet, which would rank at the top? London is a good example, with 150 of the UK’s fastest free Wi-Fi hotspots, and the open data platform, London Datastore, which is used by more than 50,000 citizens, businesses and researchers every month. In second place would be New York, for its initiatives to collect massive amounts of data thanks to IoT devices and its policies related to climate change and air quality.

And it is back to the European continent, travelling to Paris where we will find the third smart city benchmark with the Grand Paris Express project, which will integrate the redesign of the transport network in the metropolitan area, adding 68 stations interconnected by a fully automated system.

We can refer, for example, to the increasingly well-known Big Data, or to the large number of sensors installed throughout cities and municipalities to collect information related to pollution rates caused by the mobility of public and private transport, or to facilitate the collection of solid urban waste.

But which system prevails over the others? What is the solution that unifies each and every one of the urban data collected? The answer is none other than the GIS inventory of urban data, the ally that every city needs and in which Fisotec has been a reference in the sector for more than 15 years.

This is the technique that allows us to capture and collect accurate geographic data to plan and make decisionsabout the elements and infrastructures that make up rural, natural and urban environments. All this, using high-precision algorithms and state-of-the-art technological equipment, giving rise, in our extensive experience, to the development of different types of inventory depending on the different needs demanded by our clients.

This is how we approach projects from the point of view of a more classic inventory, with devices such as smartphones and tablet PCs; more advanced inventories, using systems such as drones, laser scanners with point cloud and similar technologies; and «High Tech» inventories using Mobile Mapping, with 360º multi-lens camera and GPS equipment placed on vehicles.

However, there are many administrations and companies that need accurate and reliable data to plan improvement actions in the field of Smart Cities. The obstacle? The problem of incomplete, outdated, poor quality databases or, in the worst case, the absence of such databases, leading to negative consequences such as erroneous results and calculations, mismatches in planning, operating cost overruns, reduced sales and, consequently, a clear loss of prestige and reputation.

Features of the Fisotec data inventory

How can our urban data inventory help our clients? First of all, through the correct exploitation of the data, thanks to the use of open source Geographic Information Systems, which means an undeniable economic saving, but not only that, since our highly qualified and constantly trained staff works daily to obtain top quality and instantly available data, thanks to the concept of «Real Time», the result of one of our most ambitious projects, the Data Processing Centre.

In this way, we can have a real perception of the situation of each data inventory, making precise and accurate planning, around 0.15 metres, which leads us to achieve the maximum satisfaction of our clients, and our own, as there is no better reward than a job well done.

In short, we can say that the more than 100 million data inventoried, with our GIS software, for more than 100 city councils, 40 municipal service companies, 50 consultancies, make us look to the future with a certainty: Smart Cities need an ally, and this can be none other than the inventory of urban data.